John Mandala is on the Brevard County Reentry task force. He has written a booklet called “A Successful Reentry”. 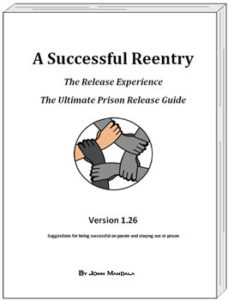 It spells out how to think about re entry into society, where to find volunteer opportunities, how to deal with feelings of isolation and many other things. John’s focus with the reentry handbook is to make it easier for people who don’t have any support, to find a way to navigate this reintegration into society. It was to help them find a methodology, a list of things to do or not to do, new ways to think about their place in society. It’s a place to start. The Brevard County reentry task force concerns themselves with things like that too. That’s why John is on the team.

Here is an example of the kinds of things the Brevard Reentry Task force focuses on. To quote them:

“Homelessness – Even though an individual or family does not have a place to live, their identity should not be lost in the stigma of being “homeless”. They have names. Often times their living conditions or lack of shelter is temporary. It is not who they are.

Perception- The stigma that follows an individual who has been involved with the criminal justice system can inhibit reentry. Public perception of crime is heightened by the constant attention to high-profile cases on the news. This brings attention to the public’s general fear and distrust of past offenders, which can complicate any progress made to help those looking to gain meaningful employment.”

“John Mandala announced that Breathing Space partnered with PETA family and gave out 565 meals at Thanksgiving.”

We need to support people who can identify as “homeless” and ex-prisoners. If we expect them to fall in with the rest of us, they are going to need a leg up. A moment of compassion, an extension of trust, an opportunity to work, an opportunity to help out and to feel a part of things; this is how the community at large needs to react. The Brevard Reentry Task Force is a great example of how we can come together to help.